When George and I decided to build our cabins, we were having difficulty finding the plan that we could look at each other and says “This one! This one’s the one! ” and even then it was just the basis of what we wanted to build!  We had a number of architects try. But they didn’t inspire. Besser block with mini orb. What if we had done that? We would have had to pull them down and start again long since.

What we did build was a collaboration of George, our son Rob, myself and our friend draughtsman Rob Ver Maas. We wanted a space where our guests, who are in general time poor, could connect. So even when they are in the spa they can talk to their partner who could be in the  bedroom or the ensuite or on the deck. It needed to be beautiful and feature our beloved wood, and it needed to include the lake, rain forest and lawns in the view. So no curtains. It needed to capitalise on the views while maintaining the privacy and security of each of our guests.

Nearly 20 years later, with a load of maintenance along the way, we still have timeless treehouses, that we have lovingly polished and updated.

We set our budget and began to build in 1996. However, this budget thing seemed to get out of control as George began to take on some special craftsmen. We met Jack Wilms at an early Maleny Woodshow in 1997. It was here we bought our first carved mirror. It resides in Two Frogs bathroom. Later we asked him to carve in our treehouses and he carved our fabulous front doors. His first set of doors as I understand. You will see Jack’s carvings along the entrance to our reception and between the penthouses Dragonfly and Secrets.  I always said Jack did the tweaking at the end. 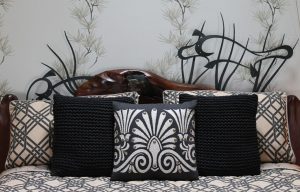 Our neighbour in Baroon Pocket Steve Weiss had been a blacksmith and, when his property had been resumed for the Lake, we were able to purchase what was left of his land. This is where we built Secrets on the Lake. Steve won a Churchill Scholarship and on his travels met Ralf Driessen (Metalmorphosis) and brought him to Australia. Ralph has been the wonderful metalworker who has created the amazing iron work in reception and cabins.

Roger Chadwick who created the majority of our front doors to our treehouses. After much discussion based on the special themes he produced fabulous carved doors that are strong and top quality. In some of our penthouses he has done some of the beautifully crafted wardrobes as well.

Our guests are able to enjoy some really beautiful original art. Our walkway lamps were made to meet our original concept by Cathy Lawley who has since sold them to the public. Marion Uithol made our stain glass windows not only did she design them to suit our themes but she specially fired glass unique to her designs. To top it off we have fabulous bar relief designs in Lindsay Muir’s unique rainforest themes in each of our treehouses. It is like living in a gallery.

A wonderful artist, Rebecca Wilkie, has designed our special shower features. A tree in The Bower, toy lizards in Lizards Lair, dragonflies with slip streams, a platypus in glass tiles. They are all wonderful and I was always blown away by her skill and professionalism.

Bob Artman, no longer with us, left his legacy with the beautifully tooled woodwork around our spa baths in the earlier luxury treehouses. He set  the benchmark. Take a look at Possums!

Ken Long was the very first carver. His work in The Whistle Stop and along boardwalks is whimsical and stunning and he set the trend. Thank you our friend!

To all of these and other clever people, “Thank you!”