I was born on 9th June 1944. My Mother said that in the early hours of that morning my Dad raced her to the hospital in Dalby. It was freezing and they were bundled up with blankets as there was no air con in those days not even a car heater. That came later. At one stage they considered the name Diana, but, in the end named me for a family friend Aldyth Butler and a gentleman Mr Lee who had been good to the family in the past. Pronounced “Al…dith” 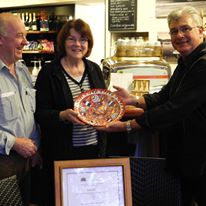 My Dad then proceeded to register it with the wrong spelling “Aldath”. This was always a disappointment to me as the original Aldythe was Welsh and there was a Welsh Queen with that name around 11th Century. It was also one of the names of the grandmother of William the Conqueror. My information came from books like “1066 and All That”

From the time I left home my name was a source of frustration to me.
It has always been evident to me that people expected to know the name when they are introduced so they don’t really listen. Sometimes having to repeat my name at least 6 times was the norm. When I married, George had this pleasure.

Once my neighbour, in Toowoomba, after attempting to explain my name several times, I gave up and answered to Anne for the 2 years we lived there. Others have called me Elvis, Ardath (as in the cigarette brand). There are those who think they know best and in the face of being told the correct pronunciation, insist in calling me “All…darth”

As a young adult I considered changing my name but didn’t go ahead as I knew it would hurt my parents too much.

In retrospect I am grateful for my name. There was always only me with that name. I have met 2 people who had mothers with my name. One lived in the US the other in the UK and I met them through our business “Secrets on the Lake”. One of my favourite books “Seven Little Australians” had a character called Aldith McArthy who died saving a child from a falling tree. It was very sad but as a child it made me feel less odd.

Australia has changed in the 70 odd years since I was born and many Aussie citizens have different names and I have been guilty of asking people to repeat their name and having them spell it to me carefully, so I can email them successfully. It’s a sort of déjà vu, so I try to  be respectful.

When George and I began our business, “Secrets on the Lake”, I decided to use my childhood nickname “Aldy” as it would be more easily understood. This worked, saved lengthy discussions and for a number of years the issue of my name disappeared. Of course more recently a new supermarket chain “Aldi” opened so now conversations about how to spell my name are required for email addresses, banking details etc. People find it amusing ,and more recently some have laughed out loud, that I am named after a supermarket. I smile and are tempted to say do the Maths but think after this discussion they won’t forget my name!